Last week i enjoyed some business news about the worlds largest airports in number of passengers. I followed a link to the official statistics and as a GIS-Nerd the idea was born: A geodataset would be nice…

I looked around and found an opendata-Shapefile with thousands of airports around the world. So I just had to join the official statistics with the geodataset 🙂 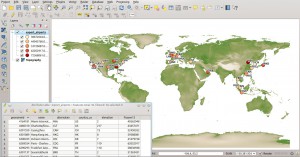